Board member, Jinx Barton, recalls more than 45 years of Pickersgill

Pickersgill is unique in many ways, from its historical namesake and 200+-year heritage to its all-female board of directors. Most unique of all is one of these board members who is now in her 46th year of service to the Pickersgill community. 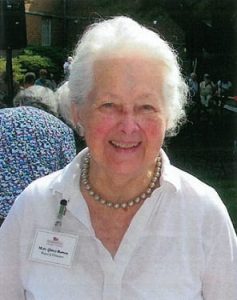 When Jinx Barton joined the board in 1971 only the name was the same as it is today: Pickersgill Retirement Community.  The “home side” (assisted living) was the sole facility and housed 150 residents.  There was one director, one secretary, and a head nurse. Prior to Mrs. Barton joining the board, there was also a “housemother” who lived at Pickersgill full time and was the main person in charge.  Residents had their own bedrooms and two bedrooms shared a powder room with a common shower room in the hall.  What is now the Willard Auditorium was an open patio with a fountain in the middle.  At the insistence of the residents the fountain was moved to Towson from the garden of Pickersgill’s downtown Mens’ Home.  Legend has it that after only one night the fountain was turned off – apparently the sound of the water had too many people running to the bathroom!

Board members’ roles were far different forty-plus years ago.  When residents were accepted into Pickersgill they had to turn over all their possessions. The practice was that a board member would conduct a home visit to assist new residents in selecting personal items to furnish their new accommodations. Everything else became property of Pickersgill; which is why today pretty antiques grace every hallway and sitting area.  In the past board members had a myriad of tasks: one rode a tractor and cut the grass; a board member doled out money to the residents from their social security checks; others took the residents shopping for clothes and necessities.  During a strike in the 1970s board members and other volunteers worked in the kitchen, helped clean, and even helped bathe and dress the residents.  Mrs. Barton mended and sometimes remade residents’ clothes and made walker bags. She also helped with decorating, hanging artwork and sponsored the residents’ Garden Club, which went on regular outings.

Mrs. Barton has served on many board committees over the years and was president from 1975-1980. She has seen significant changes to the facility in her four and a half decades with the board.  Pickersgill has grown into a community that accommodates residents who live independently with additional levels of care that extend to residents who need 24-hour assistance.  Although board members are no longer mowing the lawn or working in the kitchen they are vital to the operation of Pickersgill Retirement Community and set a high standard of excellence as strategic, long-term visionaries.

Mrs. Barton remains committed to the place and to the residents.  She says Pickersgill “offers more to people than they can get anywhere else: companionship, friendship, comfort, good food, and many activities.  That’s why I’m still on the board, I just love Pickersgill.”