Too good to miss!

The Art Gallery is a must-see destination at Pickersgill Retirement Community.  Located in a nook at the junction of  two busy corridors outside the Willard Auditorium, Pickersgill’s Art Gallery is a space where examples of fine art created by resident artists are on display for everyone to enjoy for their imaginative, aesthetic and intellectual content.

The revolving exhibits, which feature art on loan from the artists’ private collections, are curated collaboratively by the Gallery Committee (board members:  Jean Smith, Jean Heill, Carol Mackay and community volunteer Jean Lillquist) in consultation with the artists.  There are many talented artists among Pickersgill’s residents which means that the pieces selected for display in the Art Gallery change several times a year. Each new exhibit creates a high level of interest among our resident community as well as our visitors. Be sure to stop by the gallery next time you visit.

Read on to learn about some of our featured artists.

Artist Sally Cartwright – Although Sally Cartwright majored in art at Western Maryland College she didn’t take up painting until her children were in their teens, and even then she might not have had she not struck up a conversation with a woman in a framing gallery where Sally was working. The woman was an artist who persuaded Sally to paint with her. From this marvelous teacher Sally learned the “Old Masters,” or Maroger painting technique, in which the artist first does the entire painting in shades of umber and then goes back and glazes color over it.

Sally’s 40 plus years of paintings have several common themes. She loves the French impressionist painters, in particular Camille Corot and Berte Moriset, of the pieces which were featured in the gallery two were copies of work by those painters. Sally is also inspired by nature scenes. She says, “Each landscape painting is a snapshot of a scene that I love,” including scenes from the vacation retreat her family had in the Adirondack Mountains.

When Sally’s art teacher died she found a new painting partner, or in this case partners. Many years ago Sally met Mary Hurd (a Pickersgill resident whose oil paintings have been displayed in the Art Gallery) and Mary brought Sally into her painting group. The two have been reunited and could soon be painting together again. In the meantime Sally stays in art mode. She and fellow resident Midge Taylor have been helping “enliven” the halls of the Independent Living building by seeking out new artwork; they have even found some treasures at Goodwill!  So even if she isn’t creating, you know art is still figuring somehow in Sally Cartwright’s life, because as she will be the first to tell you: “Art is my bliss!” 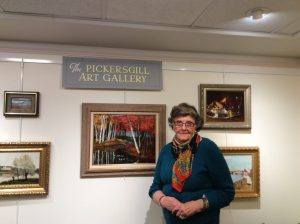 Artist Molly Golden – Pickersgill resident Mrs. Molly Golden painted for over 60 years in a variety of styles; oils, acrylics, and watercolor, creating both realistic and abstract pieces. Her favorite subjects included colorful still lifes and her family. The Pickersgill exhibit featured portraits of her husband, her mother, and her daughter, as well as her father’s department store in Baltimore and Molly’s own antique shop in Fell’s Point. Around the corner from the gallery , outside Molly’s apartment, hang paintings of her beloved cats, Spooky and Millie, and her French bulldog Bijou.

Molly attributes her eye for color and her interest in abstract art to her training as a floral designer. Originally from Indiana, Molly graduated from Goucher College with a degree in early childhood education. She has two grown daughters who live in Pennsylvania and New York. 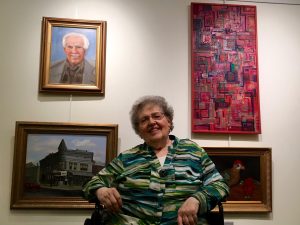 Artist Mary Hurd – Mary Hurd has been painting for over 50 years. She started soon after her four sons were all in school and she finally found a little free time. Mary and a couple friends decided to take an art class at the Towson YMCA; one class led to another and another and on to a lifelong love of painting. Mary has painted well over a hundred paintings; some were sold, many won competitions, and most continue to be displayed with pride in the homes of friends and family members (and of course the artist herself).
Mary has tried different mediums, but oils are her favorite. She loves the intensity of the colors in oil paintings, their vividness and depth. She likes the variety of textures she can produce and the fact that oils “move”; water, skies, even the sleeve of a person’s dress or jacket seem to flow when you look at them.
Her favorite canvas is actually Masonite, because it has a smooth, hard finish and makes the colors even more vivid.  Years ago Mary’s son would go with her to a lumberyard where she would buy large sheets of Masonite that he would then cut into different sizes and shapes for her paintings. She paints what she likes and what makes her comfortable. Still lifes are her favorite because of the challenge of bringing the objects to life; it’s especially rewarding when she feels she’s succeeded. It’s clear however, Mary is successful with all types of subjects; in fact, keep visiting, because you never know when she’ll surprise us with new pieces. 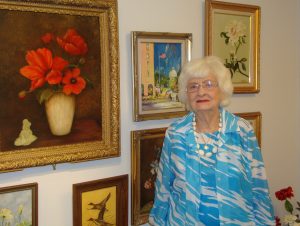 Artist JoAnn Peltz – Step through the doorway of  JoAnn Peltz’s apartment and you’ll be mesmerized by the magnificent oil paintings on every wall, from the six-by- six-foot copy of “The Boating Party” by Renior to a small, exquisite, and mysterious painting of a shepherd boy, to nearly life-sized dancers at a grand ball and ladies enjoying a formal spring outing. All of these were painted by self-taught artist JoAnn, who was in fact told not to take lessons as the results would be imitations of the teacher rather than her own work.

JoAnn was born in Baltimore in 1927. She attended Eastern High School and earned a Bachelor of Science degree from Johns Hopkins University, but her real calling was painting. She says her “art gene” came from her father, who was a sculptor.  In the corner of JoAnn’s room is a bust of John F. Kennedy that her father made. She still proudly possesses the letter he received from JFK’s brother, Robert, thanking him for creating the bust. JoAnn’s own confirmation that she had found her calling came when a painting she did of a nun won a blue ribbon at an art show at the Inner Harbor in the 1970s, after that she never entered another art competition.

Following her graduation from Hopkins JoAnn, her husband and sons moved to Palm Beach, Florida where she lived for 30 years. She returned to Maryland a few years ago and Pickersgill has been the richer for her presence. 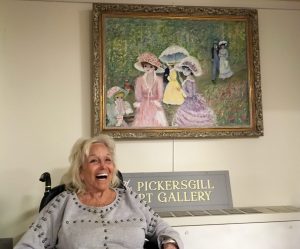 Artist Jane Seipp – Although she denies she is an artist anyone seeing Jane Seipp’s creations would disagree. Fine art is defined as an activity requiring great skill or accomplishment, one look at her framed masterpieces confirms that Jane is gifted and superbly proficient at her craft, without a doubt she is an artist. Her hand cut silhouettes are exquisite for the beauty that comes from their intricate details, they are truly a wonder to behold.

A native Floridian, Jane met her husband-to-be while attending college in Maryland, and he was enough to uproot her from the sunny south. She has been a Maryland resident since 1950 and a Pickersgill resident since 2014. However, she has been perfecting her craft of Scherenschnitte, or paper cutting, for over 35 years. Her first projects were paper Christmas trees that she made for decorations from patterns she found in magazines. This sparked her love for the art of paper cutting and she quickly went from simple trees to far more intricate scenes and subjects of all sizes. She uses patterns created by artists, which is why Jane modestly claims to be “only a crafter.” But it is she who brings the tiny details of the patterns to life. Most paper cutters use small, sharp scissors when they work, but Jane prefers an Exacto knife with a very sharp blade. Many of the lines she has to cut are as thin as thread, and even after all these years she still has a steady hand and delicate touch. She accentuates the cuttings by framing them with unique fabric backgrounds.  Several of the pieces that were featured in the Pickersgill art gallery were on loan from family and friends who cherish their art work. Jane is happy to share the pieces that she says,“have provided me with so much relaxing joy over the years.” 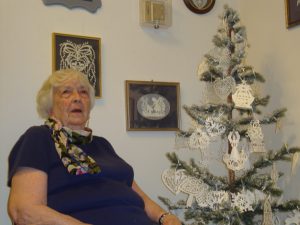